nanoe™ X Concentration Simulator lets you see the distribution of nanoe™ X over time and
learn its concentration level with expected benefits.

Huge amount of nanoe™ X are distributed by the air flow of air conditioners and air purifier to actively fill the
entire space. They create the certain level of concentration, based on the size of the space.

nanoe™ X can inhibit certain bacteria and viruses, moulds, allergens, pollens, and
hazardous substances, as well as deodorising.
They are all invisible but pollutants are existing around you and nanoe™ X reacts on them.

Proven benefits of electrostatic atomized water particles, nanoe™, through experiments
The benefits range widely from helping to inhibit certain viruses, bacteria, mould and allergens, but also moisturizing skin. Experiments by universities and research institutions have proven the effects of nanoe™.

nanoe™ is nano-sized electrostatic atomized water particles with plentiful OH radicals.
Its effectiveness of bacteria inhibition depends on the number of OH radical, which is generated at the rate of 480 billion per second. 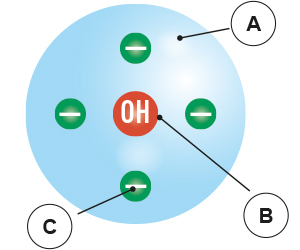 1. Long Life
6 times longer lifespan than general negative ion.
nanoe™ contains moisture around 1.000 times more than general negative ion. Being contained in water partricles, it has a longer lifespan and is able to spread for a long distance.
2. Water-originated
nanoe™ comes from condensed moisture in the air so that water replenishment for nanoe™ generation is not required.
3. Microscopic Scale
Only one-billionth the size of a steam particle nanoe™ is much smaller than steam that can deeply penetrate into cloth fabrics to deodorize.* 1nm (nanometer) = one billionth of meter

Comparison of distribution in the room
A: nanoe™
nanoe™ spreads to every corner.
B: General negative ion. Ions decay before spreading throughout the room.
nanoe™ is tiny enough to penetrate into clothes for inhibiting mould and deodorizing
C: Allergens (such as pollen, mite droppings and corpses) are enclosed and inhibited.
D: Steam particle and large particles cannot penetrate deeply inside the fabrics.
E: nanoe™ can penetrate deeply inside the fabrics.
nanoe™: around 5-20nm
Steam: around 6.000nm

How does nanoe™ technology help you? 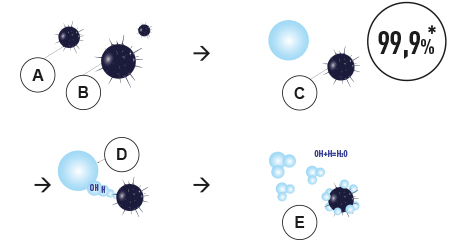 2. Deodorization
Deodorization effect works with the smell adhered at objects like sofa and curtains. Reduce 90% Odour (tobacco smell) after 120 minutes. 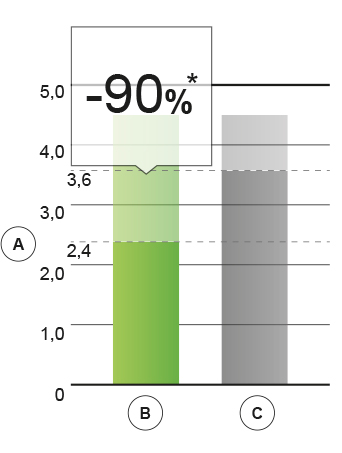 Reliable technology chosen by the world

The cutting edge technology of Panasonic’s nanoe™ purifying technology has been chosen by Lexus to equip its vehicles for clean indoor air.
Want to know more?
Call or email us now..